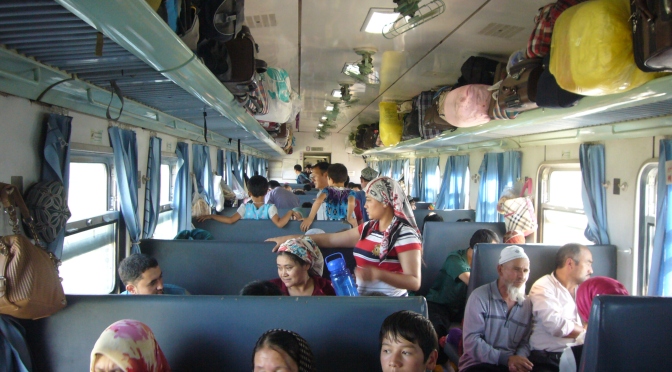 Because trains in China are not nearly as cheap as expected I decided for the third class instead of second for the whole way from Chengdu to Kashgar which means a seat in a big carriage instead of a soft bed in a six-person compartment for three days and three nights for exactly half the price. It was a great as well as a stupid decision. I would not do it again but I am grateful to have made the experience once.

The first day and night were great. All was very quiet. I met some nice Chinese students and the conductor was friendly enough to even show us an almost empty carriage in the evening where we all could take three seats to stretch and sleep quite properly. I visited Philipp in the sleeper section several times and wandered around. Because it’s common anyway in China to always provide hot/ boiled water for tea plus on the train everyone eats instant noodle soups at least three times a day (I’ve seen mothers entering the train with two gigantic plastic bags filled only with pots of noodle soups!) there is always plenty of hot water provided on Chinese trains. In every compartment is a big tank with a burning fire underneath or even small cans where everyone can get hot water at any time. It’s (the onliest) drinks and food.

On the second day it became a little more crowded (mainly with Han-Chinese people because we hadn’t entered Uigurien yet) but still there were seats available and we could walk around, chat and eat a lot of noodle soup! In the evening there were less spare seats so I had to sleep on only one, sitting.

After our one day stop in Urumqi we entered the train again the next morning. Philipp went into one end of the train for the sleeper and I into the other – the third class again what I now felt for the first time immediately! My carriage was so packed with families, tons of luggage and loudly discussing people that not a single centimeter was spare anymore. It took almost an hour until they all had settled and I could claim my seat (because it of course was already taken). Almost all people were Uyghur, only a few Han remained. The cultural difference was obvious on the first glance – different faces, different clothes and after the following 24 hours I couldn’t deny it: different manners. The nice Han couple who spoke a tiny bit of English helped me to translate to the Uyghur woman who had taken my seat that it was my seat and slowly and grumpy she moved from it.

I felt uneasy because most of the people were looking stern, no one was smiling at me, the westerner, the invader, and the family of the banished woman was angry anyway. I visited Philipp in his nice and peaceful sleeper compartment were classical music was played over the loudspeakers. But soon a conductor came, controlled our tickets and told me fiercely to return to “my class” immediately. We explained to him that I only wanted to have lunch with my “husband” and would return afterwards and he replied grimly we should hurry then.

I went back and, of course, my seat was taken again, this time by someone else of the family. At least thirty people were standing in the hallway anyway because there was not nearly enough space. I decided to stand some time on the corridor where people were smoking. The train was moving through endless desert, only the mountains on the horizon changed their shape sometimes. After some hours I wanted to sit down but the whole family was now sleeping on the seats and tables so I didn’t want to disturb them. I was slowly running out of water but the big tank at the end of the carriage was empty already. I stood on the corridor, watched the desert passing by and waited. After a while people were getting hectic and voices rose. The whole carriage was grubbing and moving and suddenly I realized why: A man pushed a medium-sized silver tank which was obviously filled with water and all woman started relentlessly fighting their way to get to it in time. I followed them but waited politely of course until I realized that there would not nearly be enough water for everyone. So I started to push my way through as well but as it got to brutal I decided to get my water later from somewhere else. Mistake!

When I wanted to visit Philipp again and fetch some water I only made it to the next carriage. A big grumpy asshole of conductor stepped into my way and wanted to see my ticket. When I showed it to him he pointed and said “Your place is there. Go back.” I said “I need some water.” He said “Not here”. I said “But my husband is in the sleeper, I have to see him.” He said “No. You have third class ticket. You stay there.” He was just big and mean and I was pissed and returned to my class. I was worried because I was hungry and thirsty and I was afraid of all the unfriendly people and afraid of the upcoming night. Luckily Philipp visited me later to see how I am so I asked him to bring me some water to my “prison”.

I was standing and smoking patiently on the corridor until it got dark and I got tired. I decided it was time to finally claim my seat for the night. The family had sat and slept on my seat until now so it was my turn now. I stood in front of the big lazy woman on my seat, pointing, showing, asking her to leave. But she wouldn’t move. I thought she hadn’t understood me so I asked the Han couple again to translate her. They did. But still she wouldn’t move. The whole family was staring at me and she kept ignoring me. I was furious but what was I supposed to do? I didn’t want a fight with the grim Uyghur men of that family and I couldn’t even ask the conductor for help. So I decided to just ignore the bold behavior and sleep on the floor somewhere. The onliest problem was: There was no space! People were already sleeping on the floor of the corridor and even under the seats! There were only tiny spaces to sit in the smokers corridor. So I sat and tried to sleep somehow and realized that Uyghur country was an area with different people and different rules. Maybe the rules of fighting or resigning.